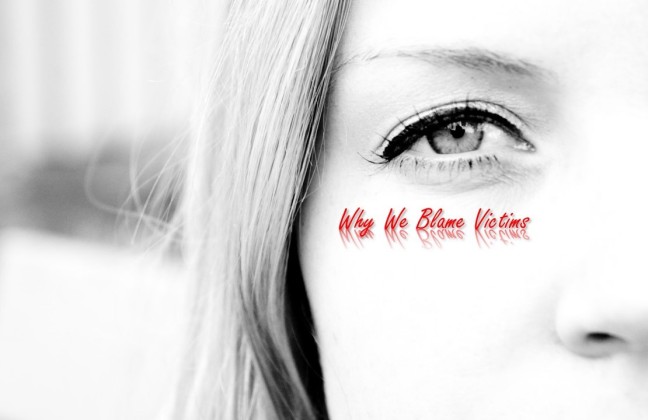 For anyone who has ever been a victim, taken the time to listen to a victim, or has even read about sexual assault, one of dominant themes is the idea of victim blaming.

Already, by simply reading that, I am sure that particular phrase brings with it a myriad of emotional responses.

To be clear, here is what I mean by victim blaming: whenever a victim of a crime is held responsible—in whole in or in part—for the crimes committed against them.

So why do we as society feel the need, sometimes intentionally, many times unintentionally, to blame victims of sexual assault for the horrific things that happened to them?

This is the tamest and probably nicest (but no less damning to a victim) form of victim blaming. Simply put: some people just don’t know anything about sexual assault. And that’s okay…if they are willing to listen and learn.

It only gets dangerous when someone wants to add their voice without taking any time to grow in their knowledge or understanding. Proverbs 18:2 says, “A fool takes no pleasure in understanding, but only in expressing his opinion.”

A large percentage of our current population has very little knowledge or understanding of sexual assault, the acute damage it leaves to victims, and what it means for a perpetrator to take personal responsibility for their actions.

“Well…she was being pretty flirty.”

“Did you see what she was wearing? She was practically asking for it.”

“If you sleep around all the time, this is bound to happen.”

“She was drunk. So that’s what happens.”

The primary thing missing from all of these statements, and ones like them, is any mention whatsoever of the perpetrator, the one who actually made a decisions, broke the law, and violated a human being.

Yet for those of us unwilling to learn, we will often accidentally add our voice to the victim blaming crowd instead of holding a perpetrator accountable to their actions and caring for victims.

Let’s be honest: none of us love to run into evil. None of us want to admit that real evil, real oppression, real darkness, and real violence happen in our lives. We prefer to keep those things to movie screens and novel pages, anywhere but in the lives of people we know and love.

This isn’t all bad, in fact often times the belief that evil is far away is what enables us to function at a high level on a day to day basis. If you left your house every day believing evil was certain in your near future you would be crippled. However, when our fear of facing evil turns into victim blaming we have gone too far.

All of us have positive illusions about life. It can be summed up this way: to an extent, every single one of us wants to believe that the world is the place we desire it to be.

Think about that. There is a type of world I want to live in, a world where bad things don’t happen to good people, where bad guys are always caught and held accountable, and where my friends and loved ones are safe from harm. This isn’t the world we live it. Yet deep down, we all wrestle with the temptation to believe that the world is the way we want it to be.

We are afraid to face the fact there is very real evil in our world, even more problematic, there is an evil that is far closer than we ever thought. And we don’t like to admit that those we know, hidden beneath innocent faces and likable personalities, have the potential to be masking an inner darkness.

We don’t like to admit that people we know could be sexual predators. So instead of facing the darkness, we blame the innocent. Because as long as we can place the blame on the innocent party, we can continue to live in denial that truly evil people exist and take advantage of others in our lives.

God speaks to this in his word. In Ephesians 5:11, God says, “Take no part in the unfruitful works of darkness, but instead expose them.” We are called to not participate in evil, and blaming innocent victims is certainly participating in evil.

More than that though, God’s standard is that we not only keep from adding to evil, but we actively work against it and expose it. This means we absolutely must face the reality that evil is alive and well even if this thought scares and unsettles us.

Thankfully God has more to say. He tells us that as Christians “He has delivered us from the domain of darkness” (Colossians 1:13) and that he is “The light the world” (John 8:12).

You see, we are called to face evil and darkness, but we are given the hope that Christ has faced the evil first on our behalf so that we as children of the light might be able to as well.

And we are promised that the light will always have victory.

So yes, we are called into the uncomfortable and the scary, we are called to stand up against darkness, but we know that God promises victory because he has conquered the darkness on our behalf on the cross. So for the Christian, we have no reason to fear standing up for light and truth.

God has defeated darkness, therefore we have no reason to fear. Let us be brave in the face of evil and place the appropriate responsibility on those who perpetrate crimes rather than the innocent.